You Are Here: ReRAM simulation with the kinetic Monte Carlo method

Redox-based resistive switching RAM (ReRAM) is currently under consideration as a competitive candidate for future nonvolatile memory application since it promises outstanding properties in all relevant aspects (speed, durability, density and power efficiency) and is furthermore compatible with CMOS technology.

The device structure is simply an oxide material sandwiched between two metal electrodes, called the metal-insulator-metal (MIM) structure. When the insulator undergoes an abrupt switching event, the transition to the conductive state occurs.

A rather large variety of functional materials are known to exhibit switching behavior under applied voltage. The most widely studied ReRAMs are based on binary metal oxides because of their fast switching, low power consumption and low cost. HfO2 is one of the most common choices due to its mature deposition techniques and high scalability.

The switching between HRS and LRS for VCM cells has been reported to be based on the formation and rupture of conducting filaments (CFs), which consist of oxygen vacancies and accompanying valence changes in the metal atoms. 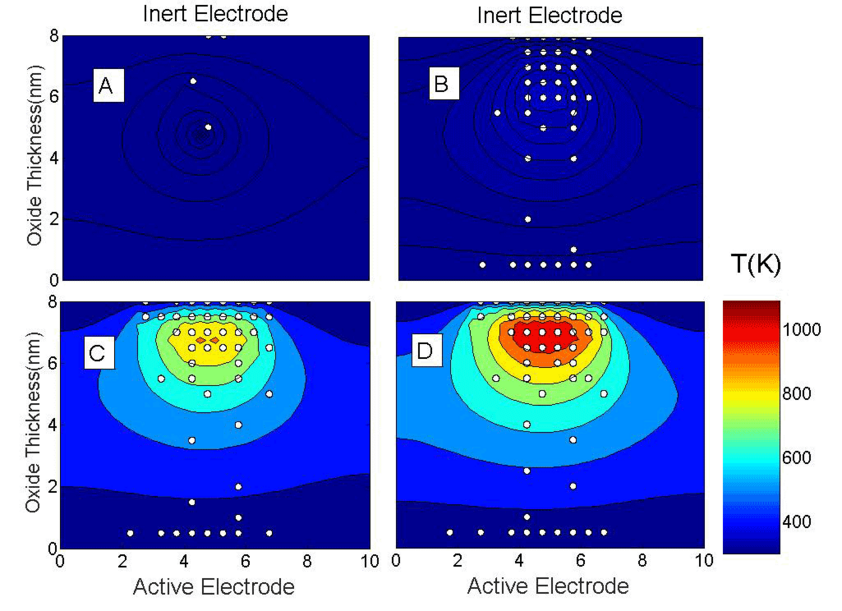 As an example, the figure shows the simulated temperature profile and distribution of newly generated oxygen vacancies at different stages of the forming process of a conducting bridge between the electrodes.

While the key factors driving the resistive switching in metal oxides have been identified, there is no sufficiently developed microscopic description of the CF features enabling memory operations and of the effects of driving factors on switching kinetics. In the current project, we focus on establishing a picture of the nanoscale properties of the CF and of switching kinetics in HfO2-based systems using the kinetic Monte Carlo (KMC) method. This is a numerically efficient approach to model the random nature of ReRAM devices and their statistical dynamics on experimental time and length scales. Our model considers bulk and interface effects to simulate the switching characteristics successfully.